The July Edition of the Competition League

After a pretty long time the weather gave us some hope for the July edition of The Competition League. The day before the competition the forecast looked promising: SSW 3-6m/s. But at the same time we received information
that the top of Mt Leinster was inaccessible for the weekend. The venue was changed for the south slope of Keadeen Mountain near Baltinglass - not many of us had ever flown there. The meeting was
arranged for the small village of Kiltegan near Baltinglass at 11am.

After coming to the meeting place I noticed way more pilots than usual - Was it about a new place? After a quick meeting we went off to Mrs Lois's farm where we left our cars. Now we only have to climb up
for 30mins:) and launch.
There were about 20 pilots including 11 of those taking part in the comp at the take off.
I was second to take off just behind Lubor as the sky was getting overcast pretty quickly and my poor position in Comp League overall pressed me for a good result ! 5 mins later most of the pilots were in the air. My plan was to get first to the start waypoint, check the hill and maybe some xc if the weather permits. After an hour of flying most of pilots left the hill.
I spotted some sunny spells I thought it was time for me. I hooked up to one good thermal in front of the hill, made it to cloudbase and left the hill in a Northerly direction, flying at the edge of the cloud. Once I passed Keadeen, over the big valley my thermal disappeared. I decided to head towards the nearest hill in hope of a thermal
but being already very low in the valley and that I had nothing but sink I turned to NE where I noticed a pretty shallow slope but bathed in sunshine - actually there was nothing else I could do with my altitude.
I was about 20m over the slope when I got there so I tried some ridge soaring but because of the shape of that hill there was no lift. In addition I realised that there's another hill 1k away to the South which meant I was in the lee side of it. I stayed airborne thanks to a lot of bubbles but I couldn't get higher that 100m over the hill and fly North.
Because of rotor flying there was pretty tough. After 30mins of struggle I was literally a few meters over the ground luckily I found a really strong bubble that saved me from a few hours of walking.  45 mins later I was still in the same place:(( Once I managed to get at 100m above the hill I flew towards the South getting more height over the
ground. A few minutes later I found some weak lift and my altitude allowed for a 360. After a few 360's the lift got stronger and I was higher and higher. I cored it to cloudbase at 1170m and I could see
Blessington to the North. There was a small valley and then mountains till Lacken in front of me.I was heading towards a pretty big hill well in sunshine so finding a thermal wasn't a problem. At cloudbase I was over Lacken and my next goal was Sorel Hill. I got there at a pretty big altitude and after a few turns I found another
thermal which I had to leave early because of Dublin CTR. There I changed my course to NW towards the N81 to avoid restricted airspace. I avoided thermals and decided to land in a  pretty big meadow 2km away
from Brittas. My GPS showed 35.6km from the starting waypoint:) so 15 mins later I was enjoying well a deserved pint in The Blue Gardiena Pub in Brittas.

Today Sunday 26 Mar 2011 we had our first Paragliding competition run by Tom Cardas our newly elected competition officer. The weather was lovely with blue skies, light winds with some thermals rising up the hill from the fields and the cut sections of forest below.

We parked all the cars within about a 15 minute hike-up from one of the many tracks on the mountain. Unfortunately we had neglected to leave a car or two by the landing field for the retrieve but we were too excited with the prospect of flying and collectively forgot.

The site is called Knockanaffrin and it is in The Comeraghs. It is about 700m high, takes a NE wind direction, has a large forested area and two small loughs. Lough Mohra and Coumduala lough. 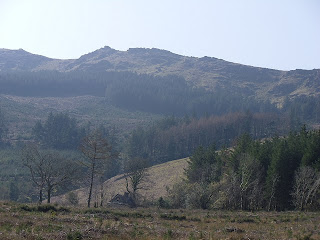 This is the first time that I have been to this mountain and I thought that it was stunning, amazing views of the surrounding countryside and interesting rock formations and cliff faces.

There were other pilots on the hill who were not flying in the competition and as conditions were light most stayed on the hill for a while, looking for more favourable wind conditions.

There were a few HG pilots hoping for a flight and a HG competition but conditions were deemed too light and that ended their hopes to fly. 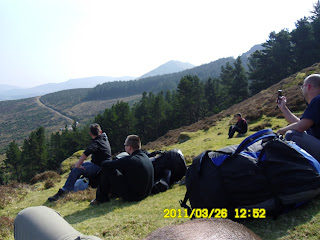 
Co-ordinates were entered into our gps's and after our hill side briefing we launched and waited in the air for the competition window to open. The wind was very light and we had some trouble staying up but hopping from thermal to thermal and using whatever ridge lift we could find we waited for the radio message to start.

Once the competition window was announced open, Big Mark and Dorin managed to get a long way down the ridge closer to our C1 coordinate. We had to get to within a 100m wide cylinder of the pre planned co-ords before we could move on to the next co-ordinate on our list. 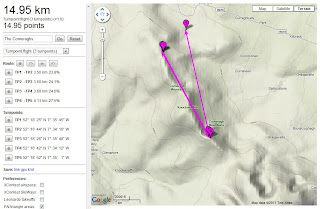 After some considerable time I managed to get to the first waypoint while Dorin and Marek were on their second visit to that waypoint at Coumduala Lough about 4km from launch.
At this stage of the competition 4 of our pilots had bombed out so it was now a four horse race.

Big Mark finished in first place with Dorin not far behind.
Tom completed the tasks before me and then it was my turn.

I made it to the final cylinder over the landing field with height to spare so I tried to get back as close to the car as possible. I landed on the slope and from the air it looked like an easy hike from where I landed to the parked car. Perspective is a strange thing and it was a lot harder in reality to make it to the car. After much cursing and sweating and a lot more time than I thought I got to the car.

Our first competition of 2011 was really cool with the weather cooperating, giving us some powerful sunshine and it reminded me of my first Xc which was not that long ago and only to Myshal from the mast.
It was really nice to be free flying with like minded people :)

The cumulative distance of the tasks was about 15Km and I cant wait till the next one.
Here's a video I took on the day which shows some of the pilots in the comp, the scenery and the  two lakes.